Francisco Goya's masterpiece, El 3 de mayo de 1808 (also known as 'Los fusilamientos de Príncipe Pío') is one of the most moving war scenes ever to have been painted. It has become a reference point for many artists who have attempted to follow in Goya's footsteps, few however, have managed to achieve such a dramatic and memorable tribute to the horrors of conflict and death combined.

What remains the most spectacular element of the painting is that Goya was not there and is not recreating a specific moment, rather, he is using art to represent the lives of all those who lost their lives to the French in 1808. In 1814, six years after the event, Goya asked the government to fund his paintings which were to depict the dreadful executions of innocent Spaniards in Madrid on the 2nd and 3rd of May, 1808. The first picture in the pair, 'el 2 de mayo' depicts the Spanish in Madrid's Puerta del Sol attempting to fight off a violent attack by the French. El 3 de mayo is a far less complex idea, ensuring the intensity and feeling have been captured perfectly. 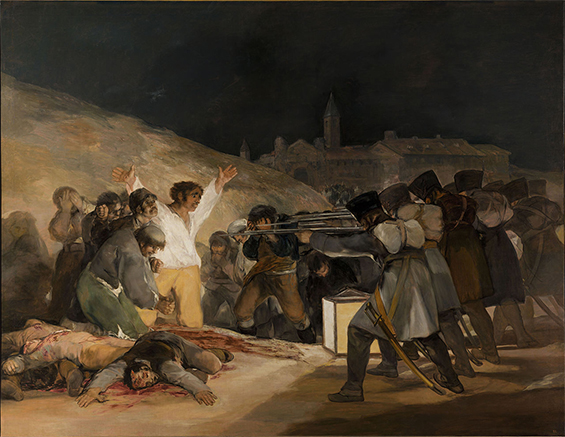 Goya depicts a dark skinned Spanish worker moments before he is executed on Príncipe Pío hill. The picture is so special as the anonymous victim speaks for all those who were murdered cold heartedly and without reason. The victim stands, arms outstretched resonant of Jesus' crucifiction, in a stark white shirt which gives him an angelic quality, reinforcing his innocence. To his left are the shadowy figures of his companions, next in line for execution. Each one deals with the situation differently, whether they cover their faces, gaze to the heavens or pray for help. To the victim's right is a bloody pile of those who have gone before him, their bodies limp and stacked on top of each other as though they were never human. At this point the pile is small, but we can see how it is about to multiply in size.

Our victim stares in horror at his enemies who stand directly in front of him. The cynicalness of the scene is increased by the fact that Goya does not allow us to see their faces. Their heads are covered by black hats and all that is visible are their long rifles which they aim at their victim. The stark contrast between the emotional feeling exuded from the victims and the harsh darkness of the faceless soldiers suggests that Goya did not even consider them to be human.

Goya's careful use of light in 'el 3 de mayo' is what really adds so much drama to the painting. The sky is pitch black and only a bright lantern lights the scene, illuminating the victim, the blood stained floor and the petrified faces of those waiting in line.

The thick brush strokes make no attempt to waste time with fussy details, but rather they capture the emotion, heavy breathing and clammy skin of the victims, plunging the viewer right into this dreadful scene but not allowing them to do anything about it. The scene is as vivid as a photograph without needing to be realist. The heavy features of the figures almost make them resemble caricatures, which is what makes the scene so universal and so remarkable.