The most famous and heavily debated of Diego Velázquez's paintings is the fantastic and unusual family portrait 'Las Meninas'.

Painted in 1656, this extraordinary slice of seventeenth century life in the royal court continues to be studied today by students, critics and scholars alike. Deciphering the true meaning of Las Meninas is impossible and it seems that this was precisely Velázquez's intention. Many questions are left unanswered allowing each viewer to draw their own conclusions regarding the true meaning and intentions behind the painting.

The timelessness of Las Meninas is captured perfectly by Velázquez because he has struck on a topic that will never fall from favour. Breaking with the norms of traditional portraits, Velázquez chooses to show us 'behind the scenes' at the Royal Court. In the same way that people lap up celebrity magazines today, human nature has always had a tendency to be nosy. Be it the seventeenth century or the twenty-first, nobody would pass up the opportunity to have a snoop around the royals private quarters. Even more so in a time when royal portraiture tended to follow stiff formalities, depicting unsmiling faces on monotonous backgrounds. Velázquez truly broke with tradition to let the world see a bit of normal life in the palace of Philip IV of Spain. In addition to giving the viewer this priviledged opportunity, Las Meninas also works to humanise the royals, suggesting that they were just like any other family. 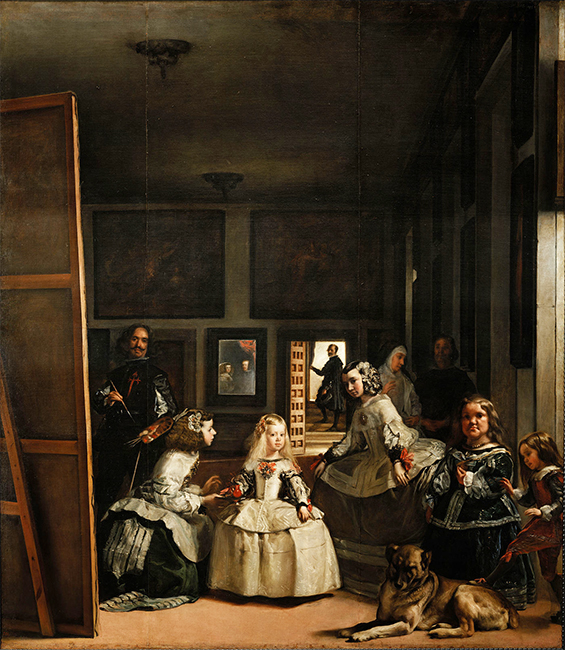 The painting appears to centre around La Infanta Margarita, aged 5, who is surrounded by her ladies in waiting (or meninas), the family dog and two dwarves. Whilst most people's attention seems to be on her, Velázquez has once again proved that those people normally kept 'behind the scenes' (like the princess' maids of honour), are also worthy of being painted. The fact that the picture is entitled 'Las Meninas' reinforces this. To the left of Margarita we find Velázquez himself, paintbrush and easel in hand, poised in front of an enormous canvas. By including himself in the main part of the painting Velázquez is asserting his own position as an artist.

However, the scene does not stop there. The most intriguing part of the painting is the fact that Velázquez has chosen to include the King and Queen only by their hazy reflections in the mirror which hangs on the back wall. Velázquez cleverly plays with perspective here and hence blurs the clarity and obviousness in his painting. His purposeful elusiveness cannot fail to raise many questions.

Primarily, who is he painting on the huge canvas which almost touches the ceiling?

Some critics argue that he is painting the scene directly to his left; that of La Infanta Margarita and her 'Meninas'. If this is the case then her parents, the King and Queen of Spain are sidelined because they are just watching their daughter. However, this would mean that Velázquez was painting the young princess from behind, which would make a rather odd picture.

The other opinion is that Velázquez is painting King Philip IV and his wife, Mariana de Austrias, as they stand before him. Margarita is simply there to observe her parents. If this is the case, Velázquez may have chosen to keep the real subjects so far out the action for several reasons. Firstly, Philip IV was not particularly keen on being painted during his later years, meaning that he could have demanded not to be painted in much detail.

On the other hand, was Velázquez using his status as Palace Chamberlain to play power games? By placing himself at the forefront of the pictures and the royals as a mere reflection was he assuming self importance? Or was he thinking of the viewer? If we consider that anyone who stands in front of the picture takes up the position that Philip and Mariana would have had, was Velázquez making another attempt to humanise the royals and elevate the average joe who looks at his painting?

These questions cannot be answered but rather, everyone who admires Las Meninas must make that choice for themselves. This, it seems, is how Velázquez intended his painting to be interpreted and it is what makes it such an enduring and intiguing piece of art.

You can see Las Meninas and make up your own mind in Madrid's famous most gallery, the Museo del Prado.