History of the Spanish Flag

History of the Spanish Flag

The flag of Spain is easily recognizable and is even described in our constitution. How did it come to be our flag? And why those two colors? The answers to both questions can seem curious for their simplicity. 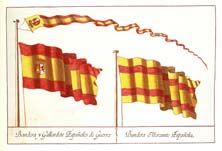 Let's rewind to the reign of Charles III, towards to second half of the eighteenth century. At that time, the flag of the Spanish crown consisted of the kingdom's coat of arms on a white background, which meant warships were confused with those of other countries.

The King then decided to change the design of the warships' flags, and so ordered that a public competition be arranged, from which 12 finalist designs emerged – you can easily find them on the internet. None of the designs impressed him, although he probably said that so he didn't have to explain to any winner why he himself made alterations on one of them: the one formed by a red stripe, then a yellow one, and then another yellow one of the same size came to have a yellow stripe double the size of the red ones.

Was the choice of these colors due to the fact that the flags of the former kingdoms of Castile and Leon had those colors in common? Was it that these colors did not form part of the coat of arms of any Spanish noble house that could question Charles III's authority? The official explanation is as simple as the reasons for organizing the competition: only two colors were needed that, together, would not represent a foreign monarchy and that they were visible. But given the astute and reserved character of the King, this was never known.

In 1785 the navy's ships adopted the flag. It served its purpose so well that in 1793 it was decided that it would also fly from ports and marine forts. Finally, it was ordered to be flown from all military units in 1843, even land forces. From that moment on it was considered the national flag.

This is a good story you can tell even to your Spanish friends, since they're unlikely to know it!

More About Spanish Symbols
Do you want to receive a free original brochure at home?
Talk to one of our advisors
Receive the monthly Enforex newsletter
CONTACT
CHAT
Chat with us