All Our Destinations
All Spanish Programs

Word of the month... Órdago (all-out)

We thought it’d be strange, given that we Spaniards are such big fans of playing cards, to not mention a word used in many of those commonly played games. Well, here’s “all-out”.

If you have studied at a Spanish university, you’ve heard of the card game mus, played by two pairs. We can’t explain the rules as that would take several books, but the word Órdago is specific to this card game. 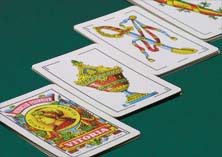 According to the rules, an Órdago occurs when one of the players gambles the whole game. It would be like saying that someone is going for broke, “all or nothing”. But when someone is going all out they can lose to someone who isn’t going órdago. So the player not only risks the chance of being left with nothing, they also risk giving everything to another person instead of the bank.

An órdago is complex, leading to a lot of confusion in common usage. A lot of people think that to echar un órdago means ir de farol (to bluff) or to lanzar una mentira (to lie); but it actually means that a person sets out to do something against all odds and they get it right, or that someone has proposed something to you which you cannot say no to, but it can be very damaging if it goes wrong.