If you ask people around the world to name a Spanish festival in which fire is the main attraction, no doubt they'll mention Las Fallas; and many will regret having missed the celebration, which takes place in March. What few people know is that there comes around another opportunity to see a breathtaking show of fire and light in June – the San Juan festival in Alicante. 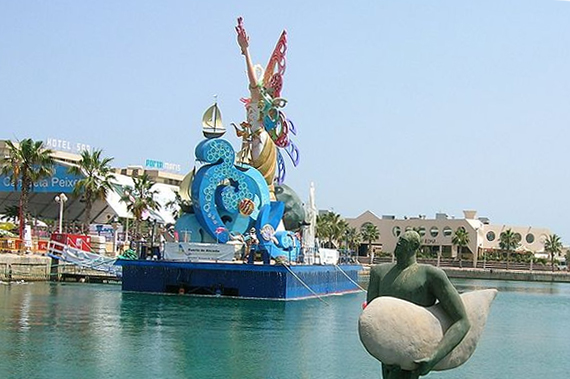 While the two festivals are similar, the Bonfires of San Juan has distinct differences that make it unique. It's true that all around the city, giant and beautiful monuments are installed, and then burned on the eve of June 24th; but the essence is different. For one thing, the effigies used during Las Fallas of Valencia have an undeniable satirical air, while in Alicante the monuments are renowned for their artistic value. You may have noticed that we said "monuments" – that's because in Alicante the whole artistic creation is more important than all the individual ninots (dolls or puppets) used in Las Fallas.

Alicante's Bonfires are also different from Las Fallas for the color scheme of its intricately-painted monuments, which consists of more subtle shades and tones. It's a small detail that makes an important difference: because the light is not the same in June than it is in March, some beautiful and colorful effects can be achieved with more muted colors.

Fire and festivities in Alicante

The origin of the tradition of these bonfires has been lost in the mists of time, but what we know as the modern-day San Juan celebration does have a date of origin: 1928. During that time, the style in vogue was  art noveau , and this artistic spirit still continues to be present every year in the various  monuments created.

During the celebration, you can witness some 80 bonfires scattered throughout the city, but if you want to go to a more traditionally authentic, intimate show you can go to one of the many organized bonfires on the beach. These shows don't feature monuments, only the bonfires, which are surrounded by families and groups of friends. According to tradition, party-goers must jump over the bonfires for good luck and to make their dreams come true ... but beware! Without practice, you could take an unpleasant tumble, so better to leave the fire-jumping to the locals. 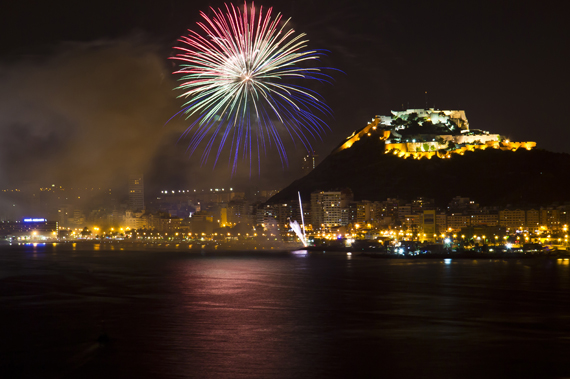 Happily, the fun doesn't stop when it's time for the fires to be extinguished. When firefighters go around putting out bonfires, tradition calls for them to direct the cool and refreshing jets of water at party-goers, in what is known as the banya.

The city's celebratory air isn't also extinguished after the burning of the monuments, though: thanks to huge, spectacular firework shows, the festivities are lengthened for many days more. It’s truly a spectacular experience: fire in the streets, in the sky and just steps from the sea. Alicante bursts into pure flames of joy!

The comparison of the Bonfires of San Juan to Las Fallas in Valencia is inevitable, but the friendly rivalry between these two cities becomes almost comical when you consider that Valencia also holds its own bonfires of San Juan. In Valencia, however, no monuments are burned (that's what Las Fallas are for), but there indeed are bonfires on the beach to jump over and invoke good luck. There are also all kinds of musical performances.

In other regions of Valencia there are other curious and interesting customs and festivals. For example, in  Bonrepós and Mirambell, a gastronomic festival takes place with two main ingredients: snails and tomatoes! In the ancient Sagunto, a mass festival of drums is organized. Moreover, in the city of Cullera  there is a ritual we invite you to try wherever you're there: write a wish on a piece of paper, go to the coast, jump over seven waves, come back to the beach and then burn the paper. 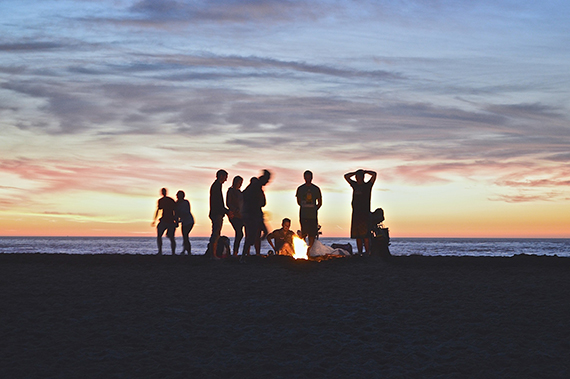 The eve of San Juan in the regions of Alicante and Valencia has a unique, special, magical air. It's a celebration we invite you to experience for yourself!